Sport provides hope and joy to billions of people across the world. As fans we have a love affair with our favorite games. When our teams win we are ecstatic; when they lose we are devastated.

When results – of games, of contests to host events or of elections to run sports bodies – are determined not by fair competition but by corruption, however, we feel betrayed. Cleaning up sport is therefore essential, not only for the good of the game but for the good of the whole society.

The two-day conference “Safeguarding sport from corruption” was held in Vienna from June 5-6, 2018. The conference was organized by the United Nations Office on Drugs and Crime (UNODC), along with Brazil, the Russian Federation, India, China and South Africa. More than 250 participants from 60 countries were attending, including representatives from national law enforcement agencies, the private sector and sports organizations such as the International Olympic Committee (IOC), the International Cricket Council, the International Weightlifting Federation and the Fédération Internationale de Football Association (FIFA). The conference specifically addressed challenges including detecting corruption and enforcement, overcoming corruption in public procurement, addressing match-fixing and countering convergences with other crimes such as cybercrime, human trafficking and migrant smuggling. 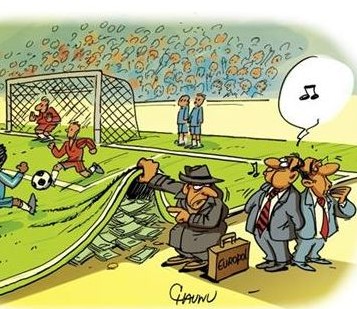 How is corruption in sport evolving into a global public policy issue? Sports associations, clubs, national teams, sports officials and law enforcement agencies are today dealing with a variety of threats ranging from match-fixing to corruption, illegal betting and use of performance and image enhancing drugs in sport. In the past century, four trends have affected sport according to Paoli and Donati (2013) – de-amateurization at the turn of the twentieth century, medicalization since the 1960s, politicization and commercialization to the point where sport is now a business worth more than US$145 billion annually. Each of these trends had a corrupting effect on what is generally perceived as a past ‘golden age’ of sport. In the 21st century more public funding is being directed into sport in the developed and developing world. Author Adam Masters argues in his paper “Corruption in sport: From the playing field to the field of policy” (published in Policy and Society 34(2) · May 2015) that organized sport has entered a fifth evolutionary trend – criminalization.

The international community must step up responses to prevent corruption and organized crime in sports and major sporting events”, said Yury Fedotov, Executive Director of the UNODC. "There is a growing understanding and appreciation that actions taken to safeguard sport from corruption in fact represent an investment, with clear economic and social benefits. This meeting is an opportunity to build on this momentum, share resources and good practices," he said.

The Executive Director highlighted UNODC work to support efforts to tackle corruption in sport, and emphasized the importance of partnerships with the International Olympic Committee, FIFA and others to promote sports integrity worldwide.The most important effort by Member States so far has been the adoption of resolution 7/8 on Corruption in Sport, at the seventh session of the Conference of States Parties to the United Nations Convention against Corruption in November 2017. Supported by 183 States parties to the Convention, the resolution is a significant milestone in addressing corruption in sport. It sets out a wide range of issues that need to be addressed and measures to tackle this problem, including procurement, organization of sport events, match-fixing, illegal betting, protection of reporting person and good governance.